The shallow tremor struck about 170 kilometres (105 miles) east of Istanbul, the country's largest city, according to the US Geological Survey.

Turkish authorities said the quake's epicentre was in Duzce province's Golyaka district, though it was also strongly felt in Istanbul.

Initial images showed people covered in blankets outside their homes during the early morning. 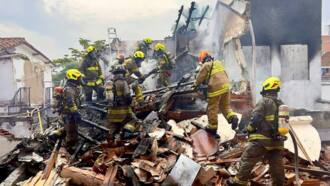 Turkey's disaster agency, the AFAD, said there were controlled blackouts in the Duzce region, warning residents not to panic.

Turkey is situated in one of the world's most active earthquake zones.

In November that year, a powerful 7.0 magnitude quake hit the Aegean Sea, killing 114 people and wounding more than 1,000.

At least 16 killed, 24 wounded in north Afghanistan blast
21 hours ago
"Too young": Girl who dropped out of school to take care of sick mum gets N10k from stranger in viral video
21 hours ago
Nigerian lady rents shop for mother of 3 kids, stocks it with provisions & freezer, she breaks down in tears
18 minutes ago
BBNaija's Kiddwaya & Laycon link up in London, they embrace each other, play games & more, video trends
7 minutes ago
CBN begins distribution of new naira notes, list penalties for abuse
4 hours ago