Aluko held that the primary election, which produced Otegbeye and the state assembly candidates, was not monitored by the Independent National Electoral Commission (INEC).

He also affirmed that the primary elections were held in violation of the Electoral Act, ruling that Otegbeye and the assembly candidates are not the valid candidates of ADC for the 2023 governorship and state assembly elections.

INEC asked to derecognise Otegbeye, others

After nullifying the primary elections that produced Otegbeye and the 26 legislative candidates, the court ordered INEC to expunge their names from the list of candidates cleared for next year’s elections.

In his reaction, the counsel to the ADC and all the candidates, Tunde Falola, hinted that the party would study details of the judgement and proceed on an appeal. 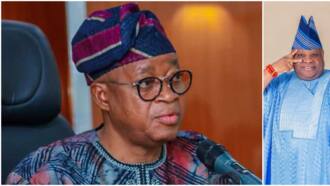 On his part, the Labour Party's counsel, Monday Mawah, described the judgment as a welcome development.

Amosun's support for the opposition governorship candidate had generated controversy and caused some panic within the APC circles.

The state governor, Prince Dapo Abiodun, had also reacted to Amosun's stance, saying he would not be deterred by the move.

Adeleke: Trouble for Davido's uncle as tribunal rejects his WAEC certificate pre...
3 hours ago
Fed rate hopes weigh on dollar, stocks fall ahead of US jobs data
43 minutes ago
Elissa Victoria’s biography: age, height, sister, net worth
an hour ago
Carter Efe brags as he buys a Benz, dances hard with only towel around his waist, video trends
an hour ago
"Na makeup he lick": Reactions as Timini Egbuson and Bisola Aiyeola get playful in lovely PDA, video trends
an hour ago