Amaechi hinted that raising funds to address the twin issues would be the first thing All Progressives Congress, (APC), will do when they reclaim Rivers State government in 2023, Vanguard reported.

Apparently throwing jabs at his successor again, the former Rivers governor, who recently pictured Rivers under Governor Nyesom Wike as being in its worst state ever, said he neither politicised development nor insulted traditional rulers during his time as governor.

He told the Elekahia gathering,

“I built a primary school that people were coming to watch. I declared health care free in Rivers State, I did not politicise it. I never insulted any chief or any Rivers man. If you are a Christian, one thing God hates is arrogance and pride.

“We are not here to campaign but to access our wards. They (political opponents) will try to intimidate you. The young men in your ward must not allow them to intimidate you. When will win, first thing will be to bring out money to address hunger and poverty.” 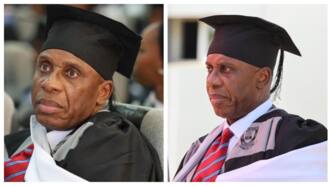 Contrary to claims that the former minister of transportation, Chibuike Rotimi Amaechi, bought his law degree, a video clip showing his active participation during the academic programme has been obtained.

Some of his colleagues, who said they were surprised at Amaechi's commitment to academic work despite his busy schedule, also attested to his punctuality in class.

onebeat.com.ng reported earlier that the Federal High Court sitting in Port Harcourt has reportedly nullified all the primaries conducted by the All Progressive Congress (APC) in Rivers state.

Some aggrieved APC members loyal to the governorship candidate of the Social Democratic Party (SDP), Senator Magnus Abe, had challenged the conduct of the primaries in court.

The aggrieved APC members alleged that they were excluded from the delegate primaries conducted in the southern state.

Young Nigerian millionaire completes his building project, shows off beautiful mansion in viral video
8 hours ago
PDP Crisis: CJN Ariwoola expresses joy Makinde is in Wike's camp, reveals connecting cord between Oyo, Rivers
23 hours ago
Sammie Okposo: "This one pain me enter blood," RMD shares video of his last moment with late singer in America
13 hours ago
"Biggest doings": Fans react to video of Zubby Micheal at the site of his New mansions under construction
5 hours ago
"How old are you again?" Fans puzzled as Kate Henshaw, 51, battles US-based choreographer on dance floor
23 hours ago