Yola, Adamawa - Senator Aishatu Ahmed Binani has been reinstated as the All Progressives Congress (APC) governorship candidate in Adamawa state by an appeal court in Yola, the state capital.

Justice Tani Yusuf Hassan, in a 3-man panel, cancelled the judgment of the federal high court that sacked Binani as the candidate of APC in the 2023 governorship election in Adamawa state, Sahara Reporters reported.

The appeal court ordered the ruling party to resubmit Binani's name as its governorship candidate to the Independent National Electoral Commission (INEC).

Why court sack Aishatu Binanu, the APC governorship candidate and only female guber aspirant in the 2023 election

On October 14, a federal high court sitting in Yola nullified the APC governorship primary election that produced Binani over irregularities.

Justice Abdul-Aziz Anka of the high court declared the APC election which took place on May 26 2022 null and void and annulled the victory of Binani as the winner of the primary.

Anka further said that the APC cannot field any candidate in the 2023 governorship election in the state. 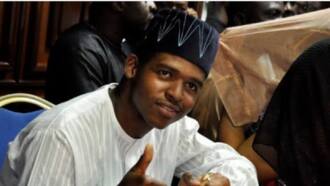 But Justice Hassan said the suit filed by the originating summons was presented before the court of appeal with 8 issues for determination as well as 2 questions to answer.

The court then cleared that 5 of the 8 issues before it were dismissed while 3 others were resolved to favour the appellant (Binani).

Her emergence has been described as historic and heroic as she defeated Nuru Ribadu, the Economic and Financial Crimes Commission (EFCC) pioneer chairman and Jibrilla Bindow, a former governor of the state.

Hundreds of women in the state have stage protests over the high court judgment, alleging some conspiracies against the female gender in the court's decision.

"Conspiracy against women is too much": Protests as court disqualified only female guber aspirant in 2023 poll

onebeat.com.ng earlier reported that women in Adamawa have thronged out in their hundreds to protest against the high court judgment that nullified the APC governorship primary that produced Aishatu Binani.

Binani's opponent in the election, Nuru Ribadu, challenged her victory, and the court agreed that the primary was not conducted in accordance with the relevant rules.

The senator is the only female governorship aspirant in Nigeria, and the court not only disqualified but also stopped the party from participating in the guber election.

"Everybody in this state is a buharist": PDP governor admits, sends jittery message to Atiku
a day ago
Wike’s bombshell: Why 5 PDP governors who share Buhari’s 13% derivational funds are being dragged
a day ago
Prominent party collapses structures as governorship, senatorial candidates, others join APC in northern state
4 hours ago