A member of the House of Representatives representing Ondo Central Senatorial District, Abiola Makinde, has assured Nigerians that the presidential candidate of the All Progressives Congress, Bola Tinubu, will not disappoint them if elected president in the 2023 general elections.

Makinde made this disclosure on Wednesday, November 23, during a solidarity rally organised by the party members and tagged “Awalokan” to support Tinubu presidency, The Punch reported.

Tinubu will not disappoint, lawmaker assures

In his address, Makinde urged the people to vote for Tinubu for the presidency and other candidates of the party in the forthcoming elections in 2023.

“We have come to appreciate the people for their support so far and we want to assure you that we will not disappoint you if you elect our presidential candidate, Asiwaju Bola Ahmed Tinubu as the next president of our nation in February next year. Asiwaju will not disappoint Nigerians if he is elected.

“You know me as your son, and I will not perform better than my first term if you re-elect me to be your representative at the National Assembly. 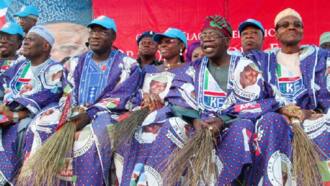 “I want to implore you to vote for all candidates of our party, APC, in the 2023 general elections, from the President to the state House of Assembly.”

The Ebonyi state governor said rather, Tinubu needs the votes of the people of the oil-rich state.

Umahi said this on Tuesday, November 22, when he commissioned the Akpabu-Itu-Umudiogha road in the Emohua local government area of Rivers state.

"Some people, nobody has seen those who went to school with them," Peter Obi chides top politician, others

Peter Obi, a 2023 presidential candidate said that his age and educational qualification are known to the public. 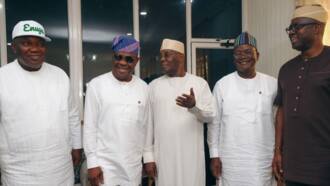 2023: Crisis with Atiku thickens as Wike speaks on G5 governors' next plan for PDP flag bearer

Obi made this statement while commissioning the Nkpolu-Oroworokwo Flyover in Port Harcourt, River state.

The former Anambra state governor said Nigerians are yet to know the essential details of some other presidential candidates contesting the 2023 race.

Prominent PDP chieftain beaten for wearing Atiku shirt at Governor Ortom's rally...
an hour ago
"Na makeup he lick": Reactions as Timini Egbuson and Bisola Aiyeola get playful in lovely PDA, video trends
2 minutes ago
One full chicken per dog: Video of Naira Marley feeding his many pets goes viral, sparks reactions
2 minutes ago
Emotional moment Rita Dominic broke down in tears, Kate Henshaw struggled to hold hers back, video trends
2 minutes ago
Finally, DJ Cuppy boldly flaunts her Oyinbo lover, reveals 'stuff' she wants to do with him, fans react
2 minutes ago

"Everybody in this state is a buharist": PDP governor admits, sends jittery message to Atiku
9 hours ago
Cubana Chiefpriest calls Chioma an Adeleke as he seemingly confirms her marriage to Davido, causes online buzz
3 hours ago
Powerful southern governor jitters about Bible verse, says “we may amass wealth and EFCC will take it"
9 hours ago
“Fake love everywhere”: Wizkid unfollows everybody on Instagram, Davido’s manager Isreal DMW reacts
2 hours ago
"Incoming president": Kid uses mic like a teacher as he leads school assembly with authority, video goes viral
an hour ago