The spokesperson of the Peoples Democratic Party (PDP) presidential campaign council (PCC), Daniel Bwala, has alleged that Nyesom Wike, the governor of Rivers state, was the one that chased Peter Obi out of the party.

Some political pundits have said the former governor of Anambra state has seen the game being played out in the PDP and he left the party when the ovation was loud.

But Bwala in an interview on Wednesday, November 23 on Channels Television, shared by the medium on its Twitter, said Wike was the reason why Peter Obi left the PDP for Labour Party.

Bwala alleged that when the discussion of zoning the party's presidential ticket to the southeast came up, Wike saw Obi as a threat and call for the ticket to be zoned to the south and not just southeast.

Why some PDP governors defected to the APC

The PDP chieftain also alleged that the Rivers state governor is the brain behind the defection of the Governor Dave Umahi of Ebonyi and Cross River governor, Ben Ayade from the PDP to the All Progressives Congress (APC). 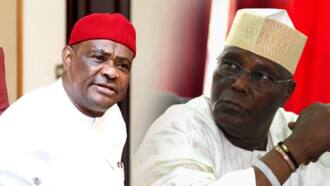 However, Wike recently commented that he was only fighting Umahi then because of PDP's interest.

Note that Umahi is the chairman of the Southeast governors' forum, an influential position that the PDP had enjoyed before the governor decamped to the APC.

Wike’s bombshell: Why 5 PDP governors who share Buhari’s 13% derivational funds are being dragged

onebeat.com.ng earlier reported that the governor of Rivers state, Nyesome Wike, dropped a bombshell on Friday, November 18, when he disclosed the source of the money he used for the gigantic projects that he has been commissioning.

According to the Rivers governor, President Muhammadu Buhari’s gesture is the major source of the revenue he used to carry out projects like flyovers, a new law school and the cancer centre.

Interestingly, all the governors are leaders of the opposition Peoples Democratic Party (PDP).

Nigerian kid gives cool dances steps, moves her body gently to sweet music from guitar in video
4 hours ago
7 Nigerian brothers give their only sister queen's treatment at her wedding, enter in style, video wows many
3 hours ago
"It will help me": Store attendant who has worked for over 20 years receives N13.3m cash gift, photos emerge
3 hours ago
Porsha Williams: Mixed reactions trail Nene Leakes' outfit for co-star's wedding
2 hours ago
3 Nigerian men survive 11 days on rudder of ship travelling from Lagos to Canary Islands
8 hours ago