Gombe state - Ibrahim Hassan Dankwambo, a former governor of Gombe state and political ally of Rivers state governor, has abandoned the G5 governors and the Integrity Group and joined the presidential campaign of Atiku Abubakar.

The Integrity Group is the political group formed by G5 governors to accommodate the PDP members who are supporting them against Atiku and the party's national chairman, Iyorchia Ayu.

Dankwambo was a prominent member of the Wike Group, which has been at loggerheads with the national leadership of the PDP and its presidential candidate, Atiku, over the continued stay of Ayu as the national chairman of the party.

With Ayu's refusal to resign, the group has since withdrawn from the Atiku/Okowa Presidential Campaign Council.

Dankwambo shows up at Atiku's campaign in Gombe

However, to the surprise of many, Dankwambo joined Atiku and other party stalwarts in Gombe on Monday, November 21, for the PDP presidential campaign rally in Gombe state, Leadership reported.

The immediate-past governor of Gombe state was sighted right from the Gombe Airport welcoming party chieftains to the rally venue, where he also took his turn to speak to party members and supporters.

The master of the ceremony, Senator Dino Melaye, later announced that Dankwambo donated 20 buses to the Atiku/Okowa campaign in the northern state. 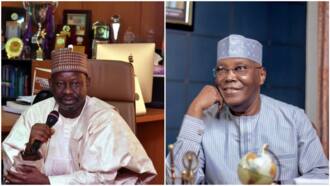 Earlier, onebeat.com.ng reported that the G5 governors and other aggrieved opposition PDP leaders said that they are still open to reconciliation with Atiku.

The aggrieved PDP members agreed that there is a need to resolve the crisis within the party in preparation for the forthcoming 2023 election.

Speaking after a closed-door meeting, a former governor of Plateau state, Jonah Jang said the group of aggrieved PDP members who have tagged themselves as Integrity Group had not closed its doors on reconciling with Atiku.