Mrs Dolapo made this known via an Instagram post sighted by onebeat.com.ng on her verified Instagram page with the caption: "You said, "Walk with me, I said, "I will, 33 years ago."

The union has produced three children, Damilola, Kanyinsola, and Fiyinfoluwa Osinbajo, who happens to be their only son.

Meanwhile some Nigerians took to the comment session of Dolapo's handle to celebrate and pray for the couple.

Ibunkun Awosika, a foremost motivational speaker and businesswoman, lauded the couple and prayed for them.

"Happy anniversary to a most beautiful God fearing and amazing couple. May the Lord surprise you daily as you walk into the many years ahead!"

"How beautiful....Happy wedding anniversary to a gorgeous couple"

"Congratulations, Sir and Ma @dolapoosinbajo May the LORD continue to preserve your home as a testimonial of His steadfastness and faithfulness." 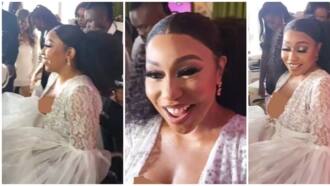 First look: Video of Rita Dominic getting glammed for her wedding surfaces online

"Happy Wedding Annivrrsary sir!ma. You will both live to witness many more sweet years together in Jesus name. Amen. Congratulations my beautiful first couple. You are an example to us all. I love uuuuu"

Meanwhile, VP Osinbajo has stated that tourism is sustainable and it connects people from different backgrounds.

The Nigerian vice president made the comment while explaining how the country's music transcends language.

Osinbajo made the comment at the opening of the first United Nations World Tourism Organisation Global Conference in Lagos.

"It will help me": Store attendant who has worked for over 20 years receives N13.3m cash gift, photos emerge
3 hours ago
Baby girl runs for joy to meet mum who came to pick her up from school, video of her reaction goes viral
2 days ago
Nigerians react as woman shares video of his gassing out boyfriend, says "see my bobo, e don tire"
10 hours ago

One full chicken per dog: Video of Naira Marley feeding his many pets goes viral, sparks reactions
an hour ago
Christine McVie of Fleetwood Mac dead at 79
14 hours ago
"I don't trust my dad": Little boy protects himself as dad swings him on a carrier in funny video
23 hours ago
New record shows Nigerians abroad send home 5x more money than citizens of any other sub-Saharan Africa
2 hours ago
New naira notes: CBN finally reacts to alleged plans to print 5,000 naira notes after a video surfaced online
5 hours ago