Tuesday, August 16, 2022, will be remembered as a day of history in Eti-Osa LCDA of Lagos state as his royal majesty Oba Abiodun Ogunbo Alashela mounted the stool of his forefathers as the first king in Ogomboland.

The Ogudu-Oshadi was presented with the staff of office by the state governor, Babajide Sanwo-Olu, in an epoch-making event graced by the crème de la crème.

Governor calls for support for the throne

Presenting the staff of office to the new king, Governor Sanwo-Olu enjoyed the sons and daughters of the land in ensuring that the sanctity of the stool is protected.

The governor, who was represented by his special adviser on local government and chieftaincy affairs Robert Bolaji, also advised that all hands must be on deck for communal peace and social development.

"The community must support the Kabiesi in all ramifications to ensure that peace reigns and support the government policies in all areas so that the community (Ogomboland) will witness more progress," the governor said through his special adviser.

In his acceptance speech, Oba Abiodun Ogunbo thanked every member of the community and added that the historical event would not have been made without their support.

The monarch equally called for support for the throne and the Governor Sanwo-Olu-led state government. 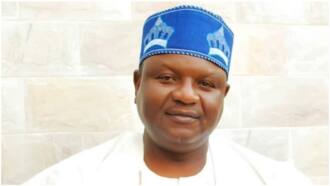 Meanwhile, onebeat.com.ng reported that the people of Iseyin in Oyo state were thrown into sudden mourning on Sunday, July 24, over the death of the Aseyin of Iseyin, Oba Abdulganiyu Salawudeen, Ologunebi Ajinese 1.

Oba Salawudeen's death is the latest recipe for pain and tears months after the passing on of Oba Jimoh Oyewumi, Soun of Ogbomoso; Oba Saliu Adetunji and Olubadan of Ibadan, Oba Lamidi Adeyemi.

"All because of man": Single mum gives up daughter for adoption after she was promised marriage
a day ago
"Is this a spiritual attack?" Nigerian lady scared as bird lays eggs on her corridor, shares video
a day ago
"3 years since I started frying akara": Young Nigerian lady celebrates in viral video, netizens praise her
a day ago