A statement by the presidential spokesperson, Garba Shehu, said the president will also commission the Muhammadu Buhari Boulevard and Launch the French Version of the Buhari Book.

The statement added that Buhari travelled to Niamey alongside the chairman of Oriental Energy Mohammed Indimi, and the ministers of defence and aviation Bashir Magashi (Rtd) and Hadi Sirika.

Further speaking at the launch of the French version of his biography said Africa needs to do more to combat the multiplicity of threats across our region of West Africa and the Sahel.

A French version of Buhari's biography

The president's biography titled; 'Muhammadu Buhari: the Challenges of Leadership in Nigeria', was launched after inaugurating a 3.8km length and 160m wide Boulevard named after him by the Government of Niger Republic.

‘‘My remarks will not be complete if I did not mention the escalating volatilities and multiplicity of threats across our region of West Africa and the Sahel.

‘‘The ever-evolving nature of the threats we face underlines the need for enhanced coordination. There is no doubt that we have made incremental progress in our collective fight against terrorism and other trans-border crimes. 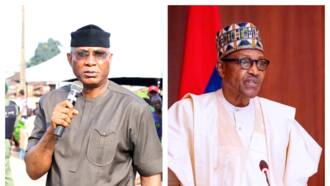 ‘‘However, a lot remains to be done, especially in the face of renewed efforts by violent extremist groups to expand their operations and footholds in West Africa."

The president described the relationship between Nigeria and Niger as a true one, characterized by shared history, values and tradition. His words:

"No wonder our people are able to coexist peacefully across our shared border, which spans over 1500 kilometres, and we remain the best of brothers and neighbours."

The 2023 presidential candidate of the All Progressives Congress had earlier been described as the best out of 18 of his colleagues.

The accolades handed to Bola Tinubu were given by the governor of Ekiti state, Kayode Fayemi on Saturday, November 19.

According to Fayemi, members of the ruling party must do their best to ensure that Tinubu emerges as the next president of Nigeria at the end of Muhammadu Buhari's tenure.

The gaffe by Bola Tinubu, the flag bearer of the All Progressives Congress who prayed for God to bless the Peoples Democratic Party has been appreciated by the opposition party.

PDP's national publicity secretary, Debo Ologunagba, described the prayer by Tinubu for the party as prophetic.

Ologunagba also called for Tinubu's withdrawal from the 2023 presidential race due to perceived incoherence in his activities and motor skills.