FCT, Abuja - Contrary to claims that the former minister of transportation, Chibuike Rotimi Amaechi, bought his law degree, a video clip showing his active participation during the academic programme has been obtained. 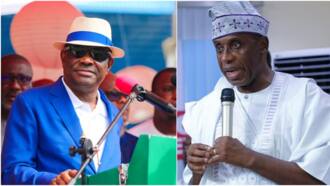 2023: Game over for Wike as Amaechi reveals plot by APC to overthrow PDP in Rivers

At the end of the programme, the school's faculty of law honoured the former governor for his diligence and punctuality.

An official who presented Amaechi with the award said in the video:

“Thank you so much for being a model.”

Responding to the recognition, the former governor explained that his penchant for punctuality dates back to his days at the University of Port Harcourt where he received a Bachelor of Arts degree (Honours) in English Studies and Literature.

“There's a number of classes you have to attend before you can write exams at the University of Port Harcourt.”

He noted that since he was at Baze University to seek knowledge, he knew that he needed to dedicate time too.

Speaking further on his track record of punctuality, he cited an instance where he was told to stop coming to a ministry earlier than the minister-in-charge. “There's a colleague of mine - a minister. She will fix an appointment and tell me to come by 10 but she won't be in the office until 11. I was always there before 10 and was waiting for her. I did it three times until they begged me and said: 'Don't come until she comes.'”

The former governor of Rivers state also hinted that he would go a step further by going to Law School to be called to bar.

Amaechi shares convocation photos as he graduates from Baze University

onebeat.com.ng had earlier reported that Amaechi secured a law degree from the Abuja-based Baze University.

Amaechi joined thousands of students who graduated from the private university to participate in the institution's convocation ceremony.

The former minister also shared photos of the convocation ceremony on his private Twitter page.

2023 election: Nigerians react as Peter Obi finally reveals how he will relate with Governor Soludo

Recall that Dino Melaye, a former senator who represented Kogi West senatorial district, also graduated from the same university in 2021.

The controversial and flamboyant ex-lawmaker bagged a degree in law from the private university.

Adeleke: Trouble for Davido's uncle as tribunal rejects his WAEC certificate pre...
2 hours ago
Elissa Victoria’s biography: age, height, sister, net worth
18 minutes ago
Carter Efe brags as he buys a Benz, dances hard with only towel around his waist, video trends
21 minutes ago
"Na makeup he lick": Reactions as Timini Egbuson and Bisola Aiyeola get playful in lovely PDA, video trends
22 minutes ago
One full chicken per dog: Video of Naira Marley feeding his many pets goes viral, sparks reactions
22 minutes ago