BBNaija Shine Ya Eye housemate, Jaypaul, caused a buzz on social media over his experience with a dispatch rider.

Taking to his Twitter page, Jaypaul recounted how the rider had charged him N3000 for a delivery meant to cost N2700.

Jaypaul then decided to deal with the rider in his own coin and sent him N2680 instead of N2700.

The reality star also shared a screenshot of the chat of the dispatch rider disturbing him for his N20 balance.

Netizens react to how Jaypaul dealt with dishonest dispatch rider

"What's the difference on top another person N300, e reach your turn, you dey cry on top N20."

"Since there’s no differencehe should not be bothered about the N20 as well."

"So proud of his action, we can all be Petty after all what's the difference."

"I am proud of his actions."

"You think say u wise, Now dey difference clear abi e no clear people can’t just take what the dish out to others‍♀️" 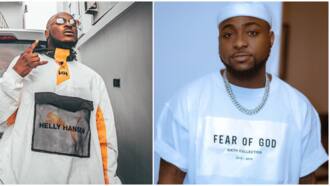 "300naira is nothing but, because of 20naira you’re ranting anyhow."

BBNaija Lockdown star, Kaisha, is currently in the prayers of many Nigerians and fans of the reality show after disturbing reports linked to her made the rounds.

On November 23, 2022, a controversial Nigerian blog, Gistlover, shared a post about a certain BBNaija housemate who was having mental health issues.

According to the blog, the person’s situation is so critical and their management resorted to deleting all the posts on her page.

Adeleke: Trouble for Davido's uncle as tribunal rejects his WAEC certificate pre...
2 hours ago
Fed rate hopes weigh on dollar, stocks fall ahead of US jobs data
5 minutes ago
Elissa Victoria’s biography: age, height, sister, net worth
41 minutes ago
Carter Efe brags as he buys a Benz, dances hard with only towel around his waist, video trends
45 minutes ago
"Na makeup he lick": Reactions as Timini Egbuson and Bisola Aiyeola get playful in lovely PDA, video trends
46 minutes ago

7 Nigerian brothers give their only sister queen's treatment at her wedding, enter in style, video wows many
2 hours ago
BBNaija's Kiddwaya & Laycon link up in London, they embrace each other, play games & more, video trends
7 hours ago
“I buy Azul, person talk say na company”: Sheggz reacts to Adekunle's claim of housemates living fake lives
7 hours ago