As the art of makeup continues to evolve, it appears many enthusiasts are devising new ways to keep people enthralled.

A video which has since gone viral on social media shows the transformation of three young ladies. 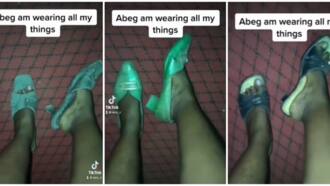 Check out the video below:

While some people were impressed by their makeup skills, there are some who believe that the before look was enhanced with makeup too.

Check out some comments below:

"Before and after are both make up."

"The before is make up! so is the after!"

"I don’t get these videos. They are making a fool of themselves. To get a like or comment. It’s also letting some think the only way you look good is wearing a "wig or wearing makeup."

"I was so scared watching this." Lady tries on her husband's collection of kaftan, internet users amused by how they fit

"They are not the same people abi."

"D before Nd after are both makeup make unah calm down."

The art of makeup is unarguably a magic trick that not so many are blessed with.

Well, this 53-year-old is certainly one magician whose recent makeup transformation has left many people stunned.

In a Tiktok video reposted on her Instagram page, the lady is seen making up and in a series of swift movements, transforms into perfectly-executed makeup.

CBN defends naira design, lists security features as Nigerians mock new N1000, N500, N200 notes
22 hours ago
Obiang wins sixth term as E.Guinea ruler
8 hours ago
"I no send una papa and mama": Ayra Starr clapback at those always criticising her for wearing skimpy clothes
6 hours ago
Banks update requirements to get forex as official and black market rate exchange rate difference hit N335
22 hours ago
"Am not good for you": Nigerian man leaks sad chats as his girlfriend dumps him for being too perfect
19 hours ago