Almost every woman - and man - is obsessed with maintaining healthy hair and good edges.

Well, for those who aren't exactly blessed with this gift, a lady has shared an interesting update on how to slay madeup edges. 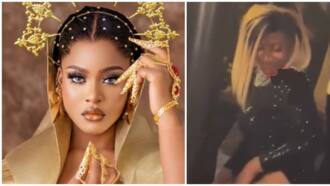 Then, she uses some edge control gel, perhaps to give it a more 'natural' feel. As if that was not hilarious enough, the lady packed invisible hair in a bun.

Check out the video below:

"I gotta start recognizing sooner when people are playing in my face."

"Her edges are better laid than mine"

"I thought she was going to put a scarf on and it be lookin’ all cute."

"I was waiting to see how it was all gonna end."

"I was waiting for the wig."

"You don’t have fear of God? I waited for something I’m not sure of. Ladies and gentlemen expectation kills."

"I can’t believe I waited till the end for the style." 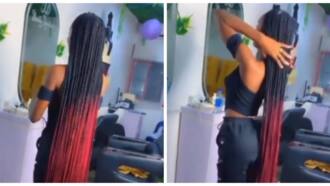 "I fully watched it with High Expectations to see what she was gonna do."

"What tis happening here ? I dunno what I've witnessed but my life will never be the same life again. #laughcry"

A woman recently showed off a wig and has many people dropping hilarious comments.

The Tiktok video reposted by @krakshq on Instagram saw the woman sporting the black braided wigs with grey tips, proudly flaunting her hairstyle.

The wig, which featured chunky cornrows rooted on a net fabric, also had some scanty baby hair laid in the front.

While some people believe in the beauty of growing old, others prefer to maintain a youthful appearance for as long as possible.

This appears to be the case for a man whose video has left internet users with mixed feelings.

The trend of hair implants is pretty big these days, but not everyone is sold on it. In a bid to get rid of his gray hair, a man ditched the hair dye option and instead underwent a hair removal process targetting only the grays.

Asoebi styles: 8 beautiful ladies show how to slay in head-turning looks
20 days ago
Tolu Bally's dress recreation spotted on Osas Ighodaro sparks mixed reactions
23 hours ago
Mum of little girl dressed in asoebi finally speaks, says 'it was for a photoshoot'
a day ago

Goodbye to Dubai as FG says production of gold jewellery commences in 2023
2 hours ago
Jubilation hits southeast as thousands of businessmen do 1 major thing for Tinubu
2 hours ago
“Doctor Pablo”: Fans react as night life king Obi Cubana earns an honourary doctorate degree
23 hours ago
26-year-old medical student buys house selling Okirika from business she started with N2k
42 minutes ago
"I no send una papa and mama": Ayra Starr clapback at those always criticising her for wearing skimpy clothes
23 hours ago