Much-loved Nigerian skit maker Mr Funny, also known as Oga Sabinus, has hinted to his fans about a new movie he is working on.

Sabinus, who is known for short skits, seems to be ready to take Nollywood by storm as he said the movie would be available at cinemas across the country.

Some pictures from the movie locations which Sabinus shared show skit maker and actor Lasisi Elenu, Tobi Bakre, among others, were present.

Sharing the pictures via his official Twitter handle, the funny man wrote:

“Sabinus the movie coming to the cinema near you.”

See the pictures below:

See some of the reactions captured by onebeat.com.ng below:

"You never drop movie, but we don know seeh you commit...."

"Sabinus in a movie with soso, it will be so funny I really can't wait."

"No watch this movie when you dey eat ..you fit choke from laugh ."

"I don’t think any other skit maker utilize their character better than SABINUS character." 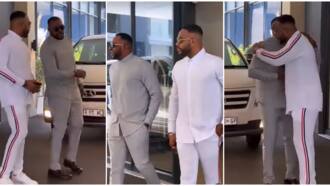 "I would personally pay for 10 people to see this movie. My support for making my day with your skits."

“I have been in port harcourt since the shoot I have no idea.”

Twizzzy, in his response, stressed that details of the new movie are confidential.

“I have nothing at all. It’s been confidential.”

Sabinus speaks about his experience at Dubai airport

The skit maker was in the news after he shared a video of him comparing Dubai airport to that of Nigeria.

Mr Funny, while sharing the treatment he received at Dubai airport, revealed that no one asked him for money as he cast a shade at Nigerians. 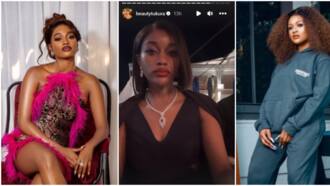 “I can’t be shouting over N100m”: BBN’s Beauty calls it change as she shades Phyna, fans react as video trends

"I don waka all through Dubai airport, nobody don beg me for money, no baba show me love na u dey chop my data, I still dey find who dey chop my data here, I no dey talk to Nigerians you know."

FG finally reveals those financing terrorism in Nigeria
an hour ago
"He needs a lawyer": Brother & sister fight, mum instructs them to only explain themselves in Yoruba, he vexes
2 minutes ago
“If you dey show me hate now, no post my picture when I die”: Actress Shan George tells frenemies in video
7 minutes ago
Adeleke executive orders: Confusion as Osun lawmaker debunks claim house rejects Davido's uncle's decision
9 minutes ago
"She got moves": Little girl dances beside mum who is doing pregnancy scan, sweet video goes viral
11 minutes ago