Famous Nigerian singer and one of the singing duo of the PSquare group, Peter Okoye, also known as Mr P, was recently involved in an online altercation with supporters of Asiwaju Bola Ahmed Tinubu.

Mr P is a huge supporter of Peter Obi and his presidential ambition, and he never shies away from online confrontations about his candidate.

However, there was a recent altercation where Peter Okoye was asked to move out of Lagos and go back to Anambra, the state that Peter Obi was once governor of since he claimed Asiwaju was a terrible choice for Nigeria.

Okoye, however, responded to the Asiwaju trolls asking why they always claimed that he made his wealth from Lagos as if he didn't work for it.

He also slams his detractors to work and make their fortunes in Lagos like he did, except if they're cursed not to.

"Lagos probably has the highest percentage of suffering people in Nigeria." 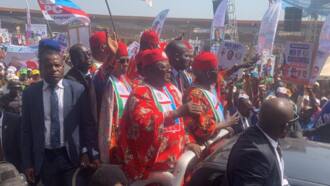 "Mother of all rallies": Gov Umahi delivers promise to Tinubu as thousands troop out for APC flagbearer

"Lagos people be feeling like Lagos is Los Angeles when most of them are broke and suffering."

"Them carry lagos for head like bottle water sellers."

"Even Tinubu himself made it in Lagos. Tinubu isn’t from Lagos. The real lagosians self no get money."

"People will just wake up in the morning and say nonsense."

"Heaven will not forgive us if we miss out on Peter Obi in 2023," Singer Peter Okoye tells Nigerians

Meanwhile, onebeat.com.ng recalls reporting that the race for the number one seat in Nigeria is in top gear as celebrities also talk and support their favourite candidates.

One of the PSquare brothers, Peter Okoye, is a big fan of Peter Obi, and he expressed his admiration for him in a tweet he shared with his numerous followers.

Peter, who is rooting for the Labour Party (LP)'s presidential candidate, urged his fellow citizens not to miss out on him in 2023.

“I don’t care about topping music charts”: Portable Zazu set to drop new album with 16 tracks, no feature
17 hours ago
Sammie Okposo: "This one pain me enter blood," RMD shares video of his last moment with late singer in America
13 hours ago
“Flexing mum”: A funny skit of Yul Edochie teaching his mum how to do the Kizz Daniel’s cough dance trends
2 days ago