Moosewala passed on in May 2022 after he was shot dead in his car by unknown gunmen.

Burna Boy and a group of others paid a condolence visit to the late rapper’s home. 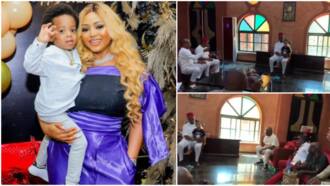 In the video, the spokesperson of the group noted that the gift was from the three of them to keep the late rapper’s memory alive. They also hoped his parents would appreciate it.

“We hope Sidhu’s parents really appreciate this and keep his memory alive and justice for Moosewala.”

“I trust my country Nigeria if na them they give them go sell every single piece of diamond on it.”

“I beg whatsup with burna and this guy??? Or baba just Dey catch cruise.”

“When you don't have family or friend at home, you will have to pay for friendship.”

“My Indian friends in Canada say they don't know whizkid but they know Burnaboy.” 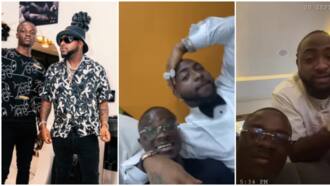 Fan runs to hug Wizkid on stage at MSG

Popular Nigerian singer, Wizkid, is no stranger to fan love and he received a lot of that at his sold-out show in Madison Square Garden.

One of the guests from the massive crowd ran up on stage to meet Wizkid as the singer performed one of his tracks, True Love.

In a video making the rounds, the moment the fan ran to hug Wizkid was captured on camera and it got people talking.

Adeleke: Trouble for Davido's uncle as tribunal rejects his WAEC certificate pre...
2 hours ago
Fed rate hopes weigh on dollar, stocks fall ahead of US jobs data
22 minutes ago
Elissa Victoria’s biography: age, height, sister, net worth
58 minutes ago
Carter Efe brags as he buys a Benz, dances hard with only towel around his waist, video trends
an hour ago
"Na makeup he lick": Reactions as Timini Egbuson and Bisola Aiyeola get playful in lovely PDA, video trends
an hour ago

Abuja junction of death claiming the lives of innocent Nigerians revealed
15 hours ago
“Shakira Shakira”: Singer Teni hails herself as she whines her new small waist in video, fans gush over her
8 hours ago
Heavily pregnant woman sees her 2-year-old son imitating how she walks, video of her reaction trends on TikTok
19 hours ago
"Incoming president": Kid uses mic like a teacher as he leads school assembly with authority, video goes viral
19 hours ago
New naira notes: CBN finally reacts to alleged plans to print 5,000 naira notes after a video surfaced online
21 hours ago