Nigerian rapper, Blaqbonez faced off with fans of superstar singer Davido on Twitter over a tweet he made recently, expressing sadness that the 30BG singer did not acknowledge his recent album, “Sex Over Love“.

Blaqbonez posted a tweet on Friday, the 28th of May 2021. The rapper has gotten mentions on social media on his album from other top acts like Wizkid and Burna Boy. He expressed sadness that he has not had posts from all three biggest artists in the country. He wrote;

still haunts me that @davido never posted my album #SexOverLove, I want to be able to say all the GOATS posted me when i dropped

30BG fans flooded Blaqbonez’ mentions attacking him for trying to familiarize with Davido after he had often pledged his allegiance to the DMW act’s direct rival, Wizkid. One of the comments said;

That’s not what’s haunting you. Your disrespect towards Davido stinks to high heavens. Upcoming rappers should never be involved in fan rivalries. Go and ask Dreylo, we already rate him above you. You wanna eat your cake and still have it? As per? 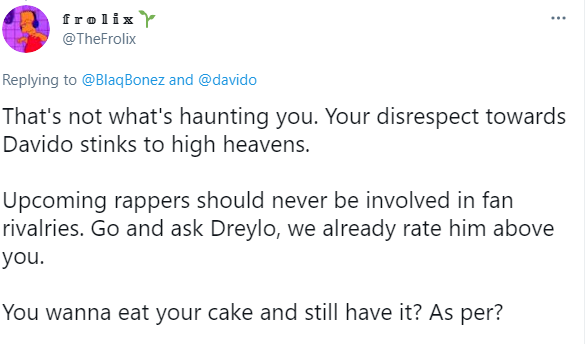 This led Blaqbonez to clarify that he loves both Davido and Wizkid equally, and has always been a fan of all three artists including Burna Boy. He also went on to post receipts of times when he has praised Davido in the past.